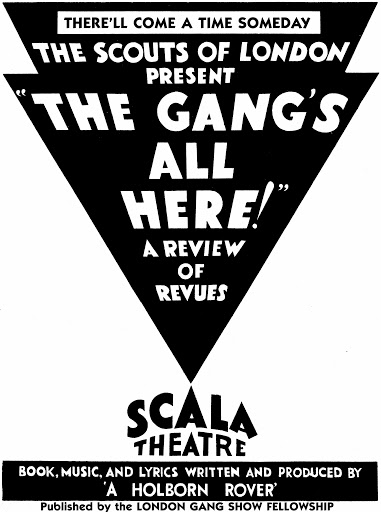 What is Gang Show

A Gang Show is a theatrical performance by members of Scouts and Guides. The shows are produced with the dual aims of providing a learning opportunity for young people in the performing arts, as well as contributing to the artistic and cultural growth of their local community.

The very first Gang Show was performed in the Uk in 1932.
It was produced and directed by Ralph Reader. Ralph was a Rover Scout who had been connected with 30 American shows on and off Broadway by the time he was 24 years old.
Ralph went on to star in movies as well as producing Gang Shows for many years.
Baden Powel himself was interested in the Dramatic Arts and had run shows in Mafeking during the siege to keep morale high.
One of the highlights of this time was the Royal Command Performance in 1937, the first time an amateur act was used in the Command Performance (They achieved the same honor in 1957 and 1964).
From this genesis has come the modern Gang Show. It forms an opportunity for our members to show case their talents. 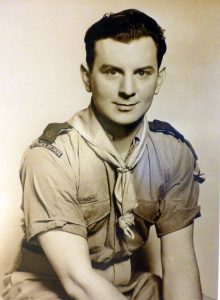 Christchurch has a long history of shows that stretch back to 1952 when an enthusiastic group of leaders and Rovers from Canterbury produced a play by Ralph Reader called “we’ll Live Forever”, it was produced and directed by Gwen Freeland, an exceptional Cub leader and theatrical person.
The story revolved around 3 families whose sons were Patrol Leaders, Their names were Tom, Dick and Harry. Peter Henwood was Patrol Leader ‘Tom’, Peter Ritchie was Patrol Leader ‘Dick’ and Patrol Leader ‘Harry’ was played by Gary Benson.
Naturally, the plot also involved a committee, parents and a Commissioner. After a month or two of rehearsals, the play ran for a week at the Repertory Theatre and was a great success.

On 4th September 1956, the curtain went up on New Zealand’s first true “Gang Show”, produced by the late Harry Killengray who had moved from England to Christchurch earlier that year. A friend of Ralph Reader, Fellow Rover Crew Member and London Gang Show Stage Crew member, Harry went on to produce shows performed at the Repertory Theatre in 1956, 1957 and 1958. He also became the District Commissioner.
Following n from these major productions some “Scout Reviews” were produced locally by some of the Scout Districts in Christchurch. 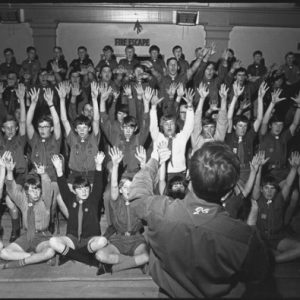 In 1960 Doug Collins ran a review over two weeks that moved from Sydenham to Halswell, North Beach and finally Rangiora.
In 1961 Peter Henwood, Patrol Leader ‘Tom’ from the original “We’ll Live Forever” show, produced an Area Gang Show assisted by Doug Collins at the Civic Theatre in Manchester Street.
The 1961 Show had a cast of 100 and around 70 Back stage and front of house staff. It also featured a 12-piece professional orchestra.
Peter went on to produce a show for the next two consecutive years, when it was decided that an annual show was a large commitment and that moving to a biannual show made more sense.
Peter directed the next 2 shows before taking a break, Allowing Doug Collins to step into the producer role for the next 4 shows.
In 1969 Doug took the show and entire cast to Greymouth for two shows and in 1971 Doug oversaw the move into the Christchurch Town Hall.
Doug retired as director after the 1973 show.

The production of the 1975 show was taken over by Terry Jacobs, a previous cast member and Rover Scout.

Peter Henwood returned to the producer role in 1977 and continued until 1985. In the Early 1980’s Scouting NZ accepted girls to join the Venturer Section, this brought a new higher standard to the production.

After 1985 the Christchurch show went into recess. However, there were some Scout Review shows in 1992 and 1994. 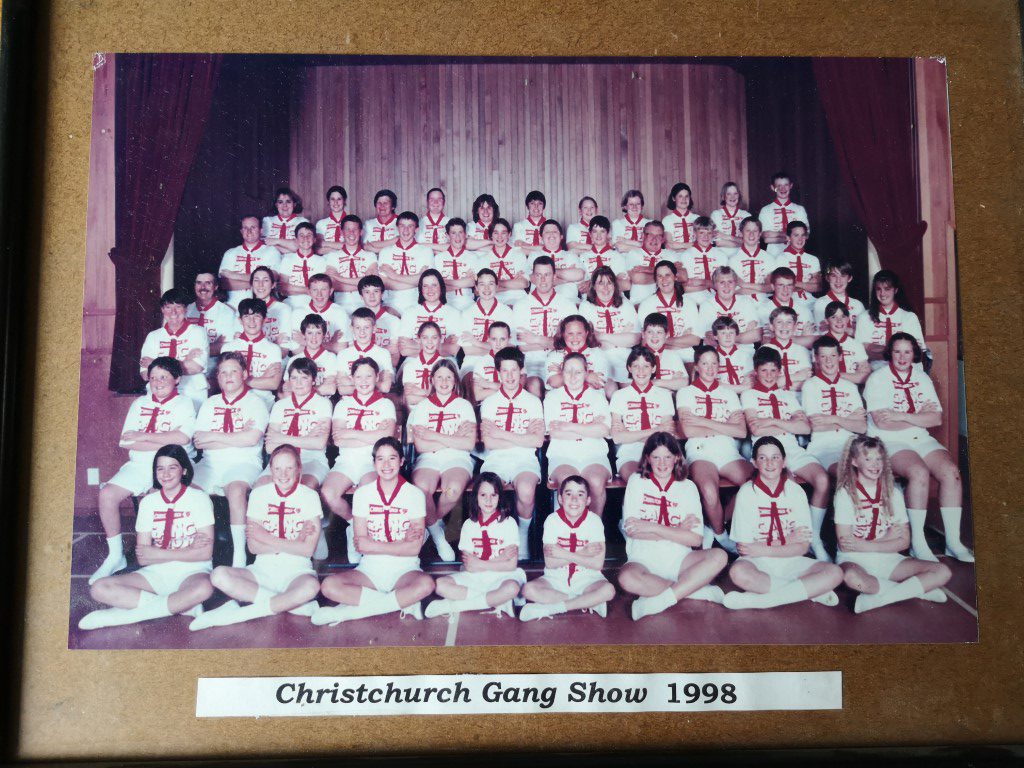 In 1996 the interest in Gang show was renewed and the team of Gang Show enthusiasts expanded. This saw the revival of the Christchurch Gang Show. When the curtain went up in 1996 it was 40 years to the day since Gang Show was first performed in Christchurch.With Roger Horton as Director, Dave Hinman as Assistant Director and Robyn O’Gorman as Choreographer the show brought a mix of old and new numbers back to Christchurch. Roger wrote and adapted a lot of the program, including an old Ralph Reader number, which he renamed Forty Years Ago.Several Old Gangsters we invited back to perform the number including the long serving Christchurch Gang Show Director, Peter Henwood.1998 saw an expanded production team with Laurie Ennor taking over as Musical Director. The programme featured several totally new numbers written by Roger Horton, however it retained its familiar finale style with the entire cast on Rostrum and many of the traditional Ralph Reader numbers.

The 2000 show started it rehearsal period win full swing, with Barbara Brookman taking on the Musical Directors role. The Opening number beyond 2000, written especially for the show by roger, reflected the leap into the new century and the program drew once again on material from around the world. Unfortunately, Roger came down with a rare condition called Guillain-Barre Syndrome halfway through the rehearsal period and ended up in intensive care. In the true spirit of show business the cast and crew carried on and produced a superb show. Happily, Roger recovered by the time the show hit the stage taking a cameo just before the finale. 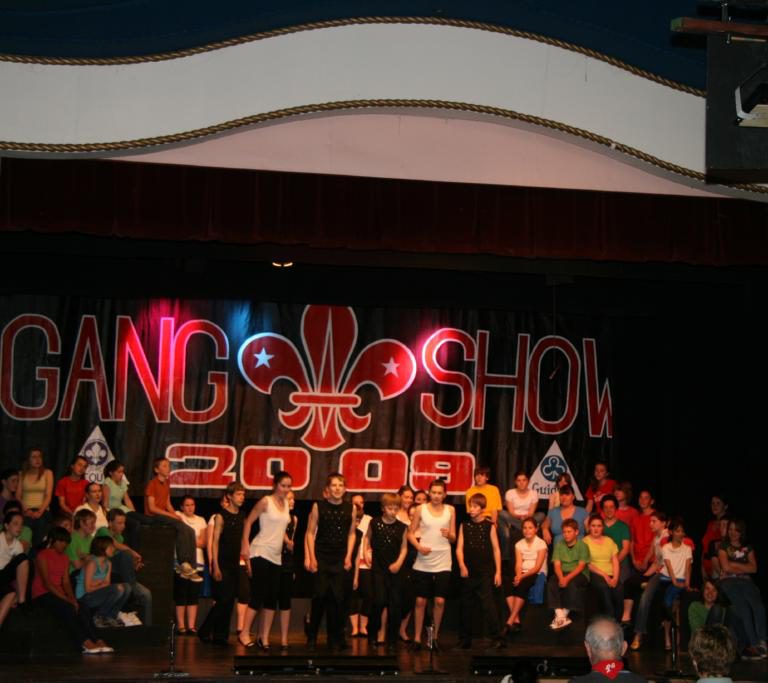 With the loss of just about all the small performing arts theaters during the 2010 and 2011 Christchurch earth quakes, Theatrical groups struggled to find space to show off their talent. The Christchurch Gang Show went in to hiatus for 4 years until it was resurected in 2015 by Roger Horton. A suitable venue was found at Chisnalwood Intermediate. Roger along with a small production crew put together an impressive show with a cast of 37 Scouts and Guides.